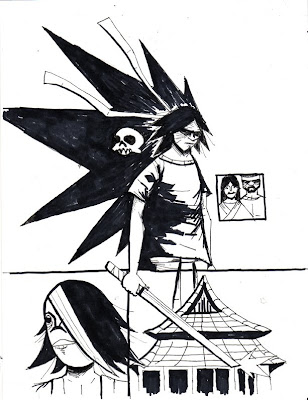 Here is jus the inks to the issue 1 cover. At least I think it's going to be. I could reconsider, but I think this is the one. It's actually a little similar to to the issue 3 cover, but oh well. The theme is it's representing is pretty much the same.
Also it's probaly not apparant in this unfinished state, but this cover is very Mignola inspired, with the separated panels on the cover, and the smaller elements in panels below the main cover. Hopefully I'll have a more finished version tomorrow.
Posted by Neworld at 12:31 AM