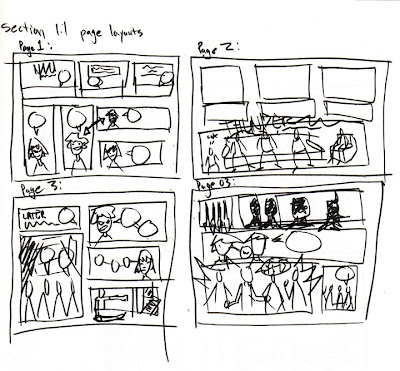 Check out some behind the scenes type stuff. Here art the thumbnails for the first section of Northpark. Don't look too close, there might be spoilers.

Progress update: Section 1.1 is totally done. Finished everything tonight. Hopefully I'll get some writing done tomorrow night.
Posted by Neworld at 12:21 AM No comments: 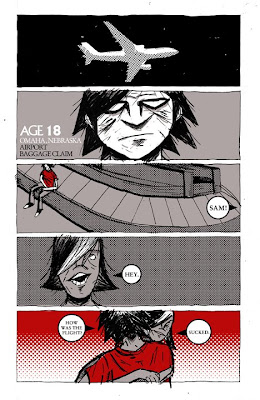 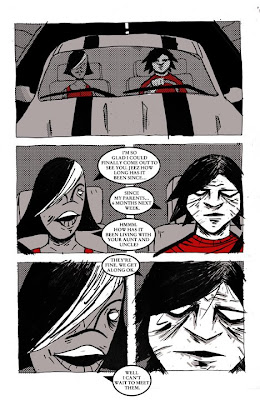 So the series SAM. Kind of fell by he waste side. I worked on it for a while, and actually wrote a bunch of stuff for it, but once I got to the art, I realized it was going to take a long time for this series to go anywhere, and I'm a very slow worker, so I decided to scrap it. It's just another one of the many scripts I wrote that are never going to see the light of day. These were the other two pages I did for the series that I never released. I thought I might show them, since the series is probably never going to come out.

Northpark Underground is kind of the perfect series for me right now. Because it let's me release things much more frequently. As far as the progress is on Northpark. I've finished the first 3 pages of the first section, and am going to start the last page of the first section today. I wish I had made a little more headway, but what are you going to do.

One last note. It looks like one of my perviously thought dead scripts, may not be so dead. Me and brother talked about using the story and characters from OZC for a flash animation/game or something. We talked about working on it over the summer. I guess we'll see what happens with that.
Posted by Neworld at 1:54 PM No comments: 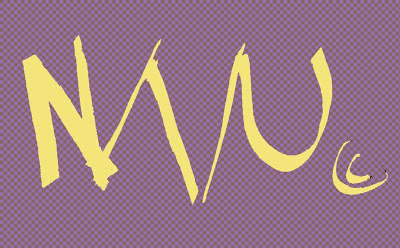 A graffiti sort of logo. You may have seen seen it at the bottom of one of the promos. Here is a color version.
Posted by Neworld at 12:23 PM No comments:

Sorry I've been rather busy. This is something I did while I was bored at work. I don't know if I'll ever use it.
Posted by Neworld at 11:54 AM No comments: 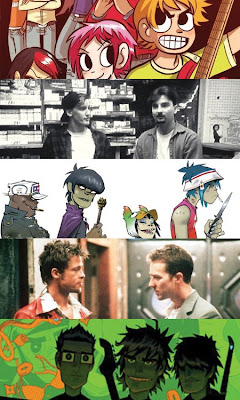 So here was an idea I had to help show off all the influences for Northpark Underground. They are kind of all over the place, some of the influences were tonal, and some of them style wise. The way I've been describing this series is Scott Pilgrim meets Fight Club. I'm hoping after section 1.1 comes out, you'll be able to look at this post and see what I was talking about here.

Oh, and a quick comic update. I just finished pencils for page 3. I'm hoping to ink it before I go to bed, and do colors tomorrow.
Posted by Neworld at 12:02 AM No comments: 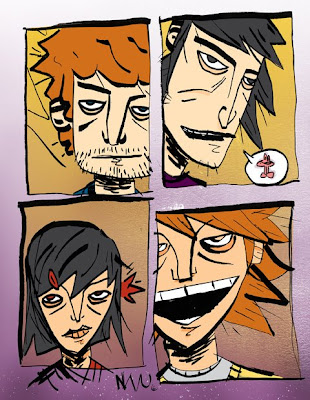 Some drawings I did for an add I posted over at the DeviantArt page.
Posted by Neworld at 11:06 PM No comments: 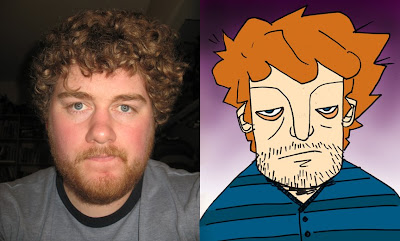 In the past I've always written myself into characters. In Neworld, all three characters were different parts of my personality. Usually when I wrote things that had multiple characters, I put one character who was very reminiscent of myself. But this is the first time I've basically written myself into a comic. The character Greg is essentially me, right down to his psyshical appearance. The way I've been writing him is a little bit more of a characture of myself, but still it's pretty much me.
Some funny things have been happening while I've been writing myself in a comic. First off, I keep wanting to actually call him Glen. Numerous times I've actually typed out my own name, and then realized later it was wrong. I also find myself making my character do things that I wouldn't normally do, but want to, and having things happen to him, that I wish would happen to me. Even when I was coming up with what power he should have, I just thought about what power I would most like to have if I had super powers. Greg is kind of like the ultimate version of me in my mind. It's been an overall interesting experience, and I'll keep you updated on if any other weird things start happening with me/Greg.
Posted by Neworld at 12:38 AM No comments: 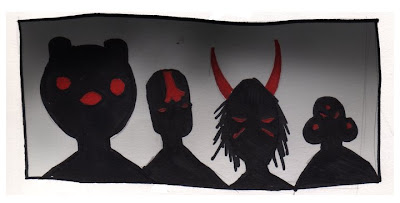 Posted by Neworld at 9:45 PM No comments:

I thought it was high time to get a new Blog Header. It was still the old Maladroits style one, and Maladroits is long done, so here is the new Northpark Underground one. This one will probably be up there for quite a while.
Posted by Neworld at 12:24 AM No comments: 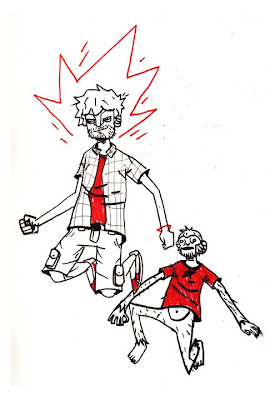 I fell off on the updates a little. So here's what's going on. I've already penciled, ink, colored and lettered the first two pages. The pages definitely take longer than any other comic I've done in the past. Between the larger format, and the more in depth coloring, It takes me a good 6 hours to finish a page (at least). So this won't be a fast process, but the page I finished today turned out really great, so I hope it will be worth it.

Here's a little drawing I did of Greg and his monkey Chip, just to tide people over.
Posted by Neworld at 11:00 PM No comments: 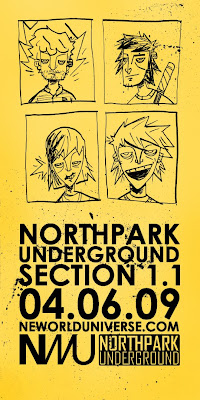 I think the image pretty much says it.
Posted by Neworld at 10:26 PM No comments:

Chip off the ole block 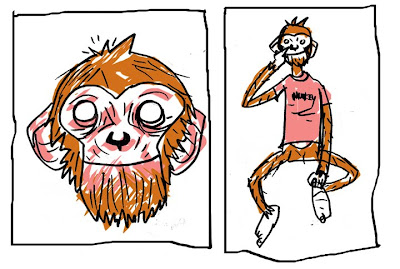 So I'm taking a break from inking the first page (woo!) to tell you about the Northpark's pet, it's a chimpanzee named chip. Here were some quick sketches I did for concepts. He'll show up super briefly in the first section. Speaking of which. I sat down Sunday night and wrote the first section. It's only 4 pages, so it wasn't a big deal, but I think I got some good stuff in there. There are a couple panels I really cannot wait to draw. I also came up with another idea for a real short story, which I wrote the other day at work. That story will probably show up after the first chapter is over. Watch for more stuff all week.
Posted by Neworld at 12:01 AM No comments: 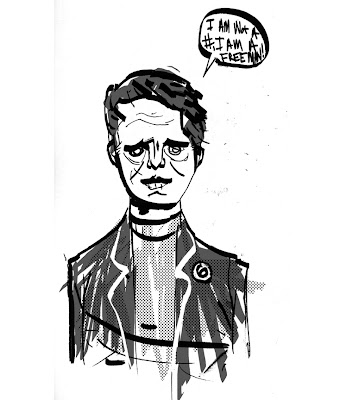 I'm trying to break up all the Northpark posts with other stuff. I bought this new calligraphy pen the other day, and this was an experiment with it. No.6 is one of my all time favorite characters. I thought I'd give drawing him another shot. I did a shot of Geoff from Tales in a prisoner outfit awhile ago, but here is an actual drawing of No.6.
Posted by Neworld at 12:28 AM No comments:

So I don't usually post twice in one day, but I thought this would be funny, and if I didn't do it now, I would never remember.

Well as you may know, the Job that actually pays the bills is my day job as a graphic designer. I work for a sign company, and usually most of the stuff I design is a tad boring, but today was different. I was asked to design a banner and logo for a school's robotics team. Their school mascot was a bear. This is what I came up with. 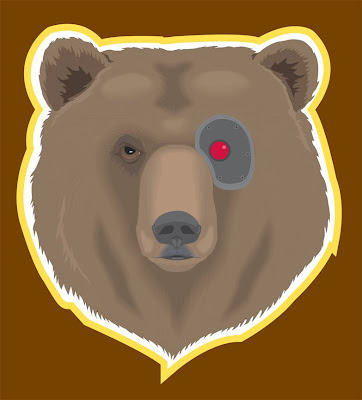 Posted by Neworld at 2:37 PM No comments: 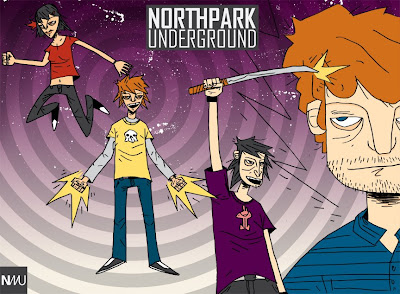 Here was an attempted cover to Chapter 1, but I decided it wasn't good enough.

Also I've been writing the first section, I'm a little over half done. it's been turning out pretty good so far. I think I've got some good stuff. I wanna give some thanks to my brother for letting me bounce some ideas off of him, for the name of the team. I think I've got a good one. We'll see if it sticks.
Posted by Neworld at 12:29 AM 1 comment: 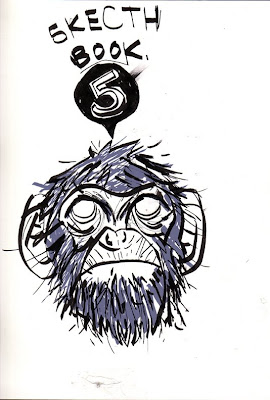 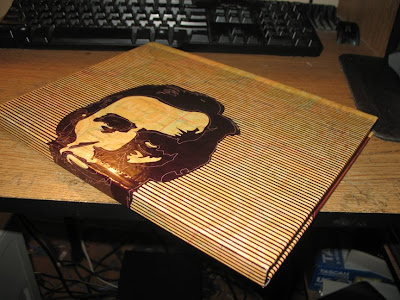 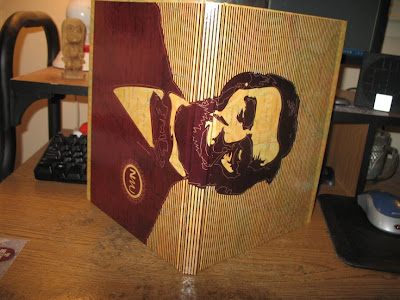 So I had to buy a new sketchbook yesterday. Up top there is the opening page. Whenever I get a new sketch book, I always do a little page and number it. I don't usually post the title pages up here, but I thought this one was particularly cool, and I wanted to color it. I also always try to decorate the cover of the sketch book, and on this one I decided to wrap the whole thing with one of my vinyl posters. I thought it turned out pretty darn cool.
Posted by Neworld at 12:05 PM No comments: 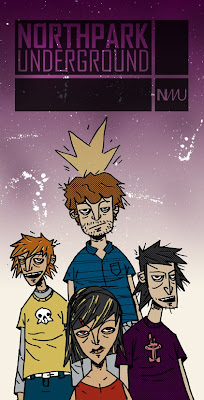 Here's a new character sketch. Just another look at the characters a little farther down the road. So I fooled around with so many other schemes, but I think I'm just going to stick with this one. Just a fairly traditional color scheme. Here's the color palette I'm working from.

Posted by Neworld at 2:32 AM No comments:

So here is the logo for the new series. My day at work was pretty slow, so I took advantage, and did a ton of writing. I worked out a lot of the character stuff (they all have names now, woo!), I established some of their back stories, and outlined the first 3 sections.

So as I've said before, Northpark is going to be told in 4 or 5 page burst every two weeks. The numbering is going to be a little funky. There will be larger chapters that are split up by sections. So first part will be called 1.1 and then 1.2, and 1.3, and continue in that order till that chapter is finished than it will switch to 2.1, this will be the next major story. There may be some out of continuity stuff that won't have the same numbering scheme as well.

I'll probably start actually writing scripts this weekend, and will start working on art after that. I want to get the first two sections in the bag before I post anything, so it will probably a little while before you see any pages, but I'll be posting on a regular basis, and I'll post a page in here once I have a good one to show. So you can get an idea of what the comic will look like. I'm thinking that sections will get posted every other Monday, and it will be posted on the main site. I'm shooting for the first one to come in late April most likely.

I did some other production stuff, and figured out what I want the page size to be. I'm going with a horizontal format like Zuda, instead of the normal vertical format. I think it will be more conducive to the web environment. I'll also be doing a website redesign before the first section comes out.

I'm pretty excited about getting started on this.
Posted by Neworld at 9:15 PM No comments: 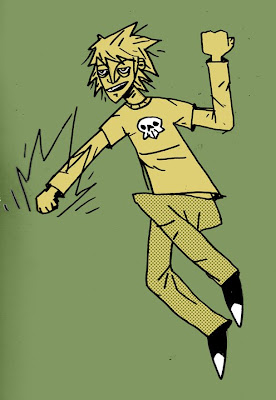 More colors. Still not really liking anything.
Posted by Neworld at 9:10 PM No comments: