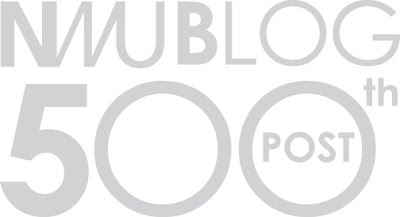 The big 500. I let a lot of the other big milestones slip by rather unnoticed, but I felt like I had to do something big for 500. I've been doing this blog now for close to 4 years which is kind of crazy to me. I still remember when I started it, and I can't believe it's something I'm still thinking about and working on day to day. So to celebrate this momentous occasion, I decided to do a little bit of a nwu retrospective. I did a new drawing from pretty much all my major creations. Have a look, I think this is the most original material I've done for a blog post so far. 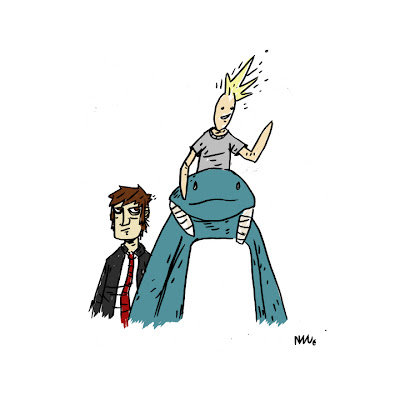 Neworld: The original. The namesake. Also by far the longest running comic in NWU history. Looking back it's kind of terrible, and very obviously my first comic. But it will always hold a special place in my brain. This is probably the first Neworld drawing I've done since the Water Closet art book a couple years back. 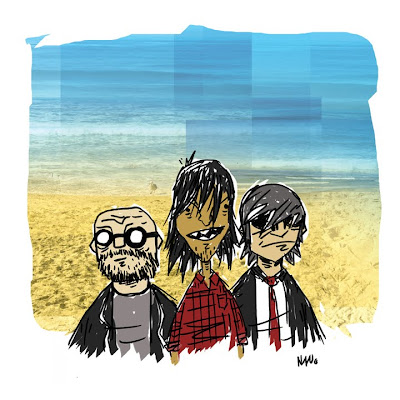 Water Closet: Starkly contrasted from Neworld, I came up with Water Closet to quench my comic book ADD. After working on Neworld for like 2 years, I really wanted to do something that was all over the place, and kind of crazy. In hindsight the writing wasn't great in these comics, but I remember the insane creativity I felt while I was working on this series. You might notice a couple people are missing. I just ran out of steam working on this post and I couldn't draw anything for Monkey Shines, maybe it will be a little bonus tomorrow or something. 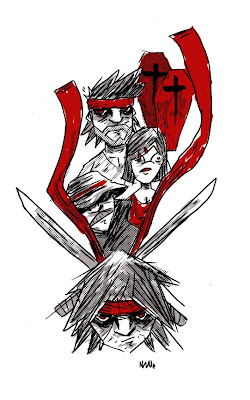 Sam: The comic that never really was. It felt like I worked on this series forever, but in reality I never actually put an actual issue out of this series. I might want to revisit this series just for fun and do another short story or something. I've still got the first issue of the series written, and the rest of the first arc plotted, but I doubt I'll ever get around to doing it. After I wrote it, I just didn't feel like I could do the the material justice. I should really post the early years on the website, I think it's still just floating around the blog right now. 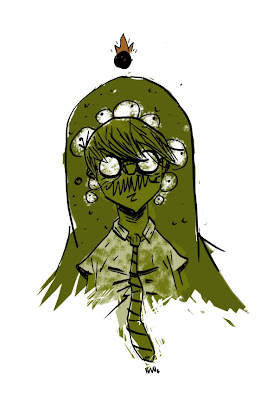 Iatrogenesis: The next comic in a long line of perpetually unfinished concepts, I do believe that this comic works pretty well as a single issue though. To be honest this one wasn't all my fault. I'm not sure exactly what happen with Iatro. Me and Devin talked about the second issue a lot, but he just never got around to writing it. We had a lot of cool ideas for the series as a whole, and it's a little dissapointing we never got to see them all the way through, but thems the brakes. I loved working on this series. I had a ton of fun collaborating, with Devin. After doing all my comic work up to that point by myself, it was so rewarding to work with someone else. The really limited color pallet was really fun to work with. I loved being able to color pages so quickly, but they still looked awesome. The first couple pages in the psychiatrist office are still some of my favorite pages ever. 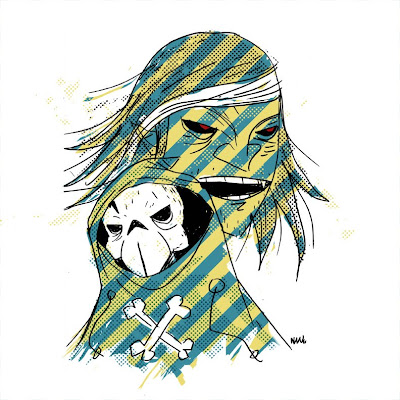 Maladroits: I'd been reading Zuda since it's inception, and I always wanted to submit something for it, but didn't want to use any of the ideas I was already working on, so when I came up with the basic idea for Maladroits, I knew it would be perfect for Zuda. It was a little a disappointing not to win (and place so low), but I've found that most of the best comics are the one that place the lowest on Zuda. It was a great ride while it lasted. This was me and Devin's second collaborations. Even though Devin's role was more limited in this one, he was very helpful for bouncing ideas off of. A lot of the ideas I had for the future of Maladroits actually ended up helping to get me to the point where I am now for Northpark. 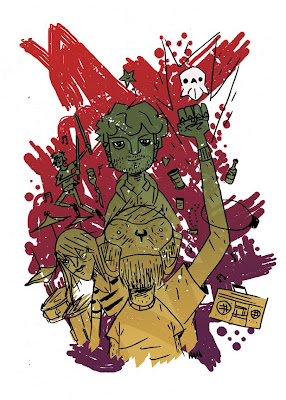 Northpark Underground: The current incarnation of the NWU. I've already said a ton about this comic in the blog, so I'll keep this brief, but this is definitely the best comic for me right now, and definitely includes the best work I've done thus far. Writing and art wise. It's on hiatus from it right now, but hopefully will be coming back soon.

I left a couple things out namely, Hungry, McKluskey's Miracle Men, OZC, Primary in Private and Billy's Adventurer's Club (probably a couple others). I just didn't have the drive to try and do everything. If this happens to be your first time at the blog, and your confused by all this stuff, you can read all these comics over HERE.

As a little added treat I'm going to link to some of my favorite posts from the past couple years:
-Christmas Kicks Ass shear epic holiday fun
-Foggy is God Foggy knows all!
-Ride The Beaver probably not what you're expecting
-Comic-Con Part 2 just a good time
-Aang One of the best fan art things I've done
-Bright Eyes Probably one of the best panels I've ever drawn
-Red Letter Day the birth of the valentines monster
-April In January A simply action packed comic
-Fish Head just something
-Sci-Fi for X-Mas duos for dad
-Double Stuffed Bionic Bears
-New Stuffes First actual Northpark drawing
-300 My favorite Maladroits drawing, and the day it went up on Zuda
-Casting Northpark casting the northpark movie
-Dawn Of The Muerto Oh the Zombie section
-Sect 2.2 Drawn Devin
-That Guy Is Poorer Than A Hobo stay away from him blaze, he might have AIDS
Posted by Neworld at 12:32 AM No comments: 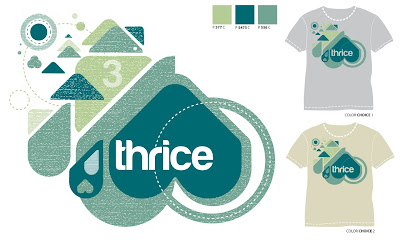 Thrice is having a contest contest to design stuff for their upcoming tour. I had some free time on my hands so I decided to do something for it. Here is my pitch, I think it turned out pretty damn good.
Posted by Neworld at 9:09 AM No comments: 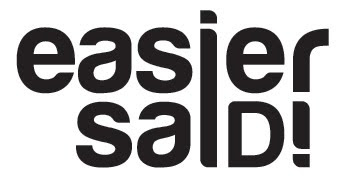 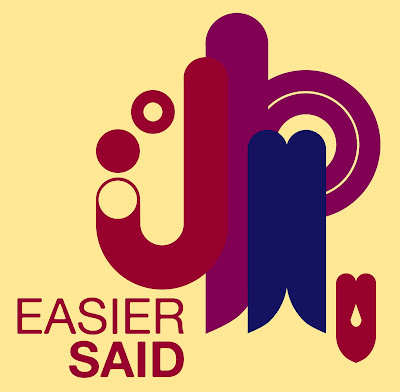 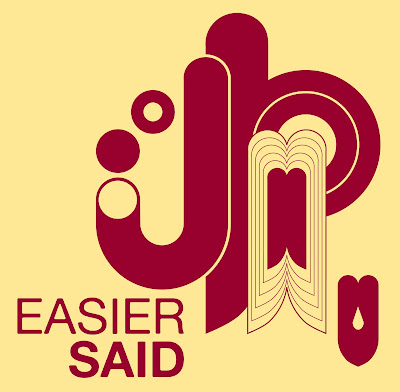 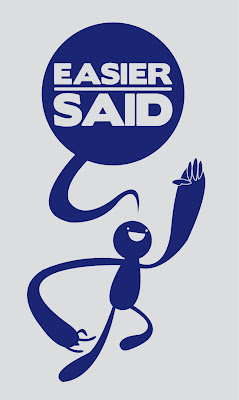 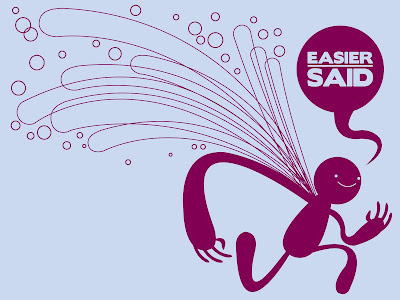 A bunch of new designs and logos I did for my friends band Easier Said. Sent them to him yesterday, we'll see what happens with them. I converted my one design I did the other day into a single color and reintegrated it for them.
Posted by Neworld at 9:39 AM No comments: 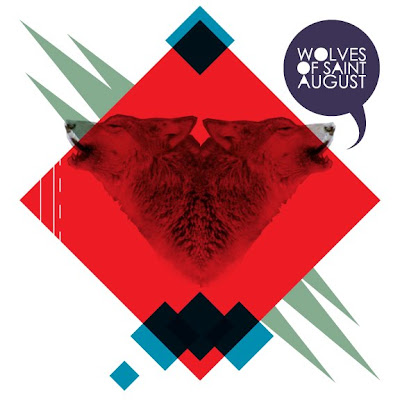 Some new artwork for wolves. Just because.
Posted by Neworld at 10:54 AM No comments: 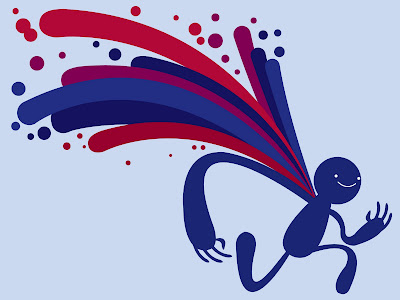 Some Randomness That I've been working on at work whenever I've had free time.
Posted by Neworld at 1:19 PM No comments: 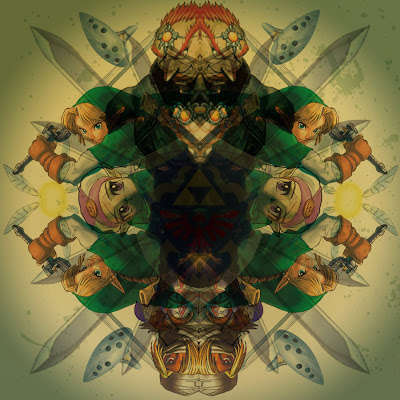 Another cover attempt. I think this might be the one. I need to figure out where to where to put the type. Or maybe no type, who knows.
Posted by Neworld at 1:37 AM No comments: 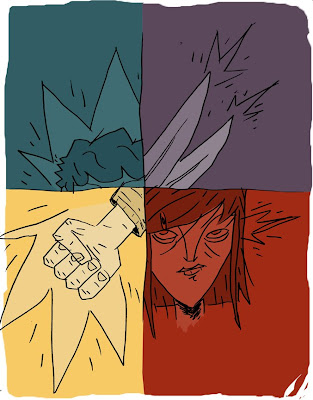 This post is going to kind of suck, but I'm going to be putting Northpark Underground on Hiatus for a little while. There are a lot of factors that include all the music projects I'm working on, I've got a little bit of writers and creative block, and I'm not gonna lie Final Fantasy 13. Right now I just feel like I'd be forcing myself to make Northpark, and for me that's not the best way to get good results. Hopefully it will be back soon.
Posted by Neworld at 8:19 PM No comments: