Dawn of the Muerto! 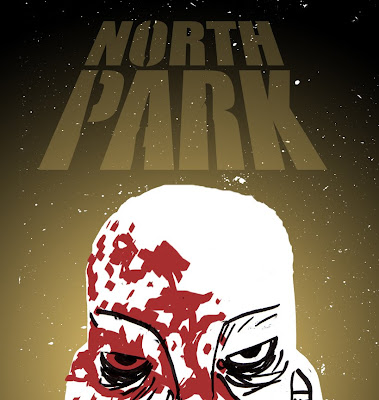 Homage to dawn of the dead. This was pretty rushed, but I just kind of wanted to through it out there. This was going to be the promo for sect 2.3, but I had a better idea and still wanted to do this.
Posted by Neworld at 1:00 AM No comments: 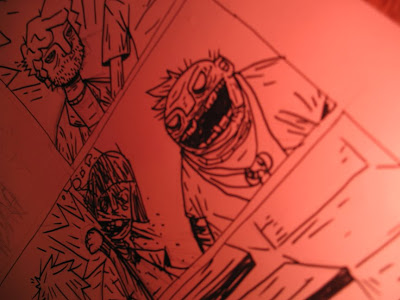 Photo of the page I'm working on. It was a ton of fun to draw. I didn't put that red filter on there, it was just there when I took the pictures, how scary is that?
Posted by Neworld at 10:25 PM No comments: 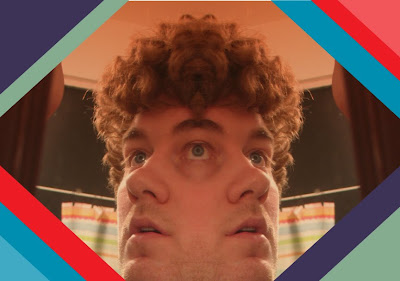 New promo image I did for for Wolves. In the style of J&D cover. Also WolfLand has been updated. And there are some new songs up for download if you look around.
Posted by Neworld at 12:05 AM No comments: 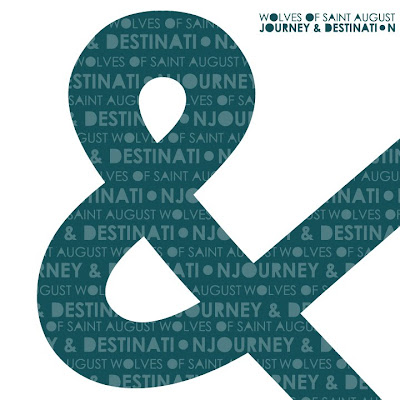 Here is another unused design for the Journey & Destination cover. I meant to post this yesterday, but forgot.
Posted by Neworld at 10:52 AM No comments: 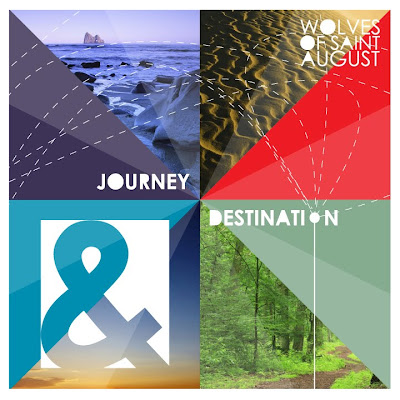 For the past year and a half I've been working on this album called Journey & Destination, and it's finally come to an end. I finished it. It's a blend of electro and rock and it makes for a pretty interesting sound. The Track listing is as follows:
1.Dance Lessons
2.Captcha
3.AT-AT
4.End Result
5.Ampersand
6.Hearts & Minds
7.Mars Is Bright Tonight
8.iROC
9."Wearing A Moustache"

Not sure when I'm going to release it, but I've got a couple things I want to do with it before I put it on the internet. If you want a taste of it check out my MYSPACE page. I just posted a new song the other day, and it's got some of the old demos from the album up there. 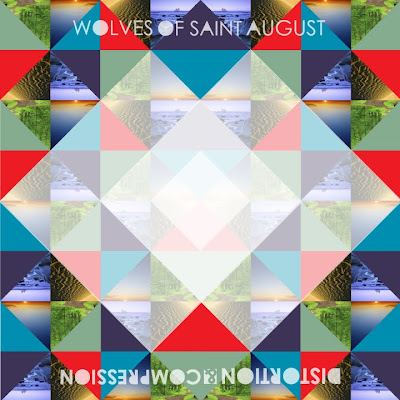 I recorded about 14 songs while writing this record, and since I only put 9 on the actual album I've got a lot of leftovers. Before I put out the actual album I'm going to release a sort of sampler called Distortion & Compression that I'll post for free on my website. It will have all the B-Sides and some alternate versions of the songs on J&D. I don't have a track list nailed down for this album yet, but that's the artwork.
Posted by Neworld at 9:41 PM No comments: 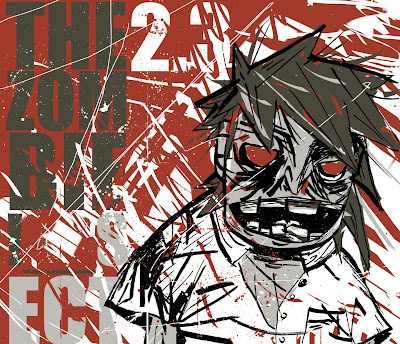 YES! 2.3 IS GOING TO BE THE ZOMBIE SECTION. THAT'S WHY I'M WRITING IN ALL CAPS. I FINISHED WRITING THE NEW SECTION AND IT'S GOING TO BE TONS OF FUN, AND I FINALLY GET TO USE MY OLD ZOMBIE CHARACTER IN A COMIC.
Posted by Neworld at 7:02 PM No comments: 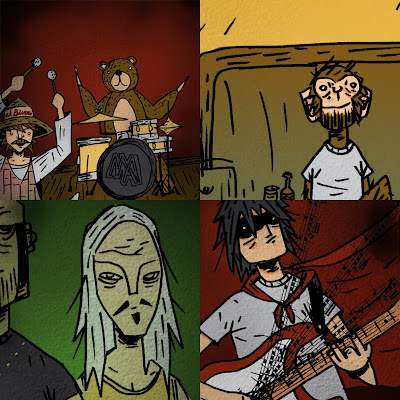 The close ups for sect 2.2. Got some interesting ones here. I love the bear playing drums and every time I can fit chip into a panel is a good time. As promised here are all the references.

References (in order of appearance):

-The big poster on the wall in Greg’s house is supposed to be the Darjeeling Litmited poster. I have a full size one in my room.

-The band playing is called Mammal Amalgamation. I thought the band that Tad played in should be something like Animal Collective, but way crazier, so that’s where I got the name from.

-Greg’s sweatshirt sports a tiny logo of a GJ symbol. Which is the symbol for the band Glassjaw, which was my favorite band growing up. I always felt an affinity to the logo since it had the G in it.

-The bouncer’s name is Kris. This is a very insider reference to the fact that a lot of my other friends thought I based the Bouncer off my friend Chris. Even though it wasn’t originally on purpose, I decided to keep the joke going.

-The manager’s look is based off the electro DJ Steve Aoki. I did change his hair and made him French though.

-The lyrics in the song that the lead singer is singing is a very vague reference to the Beatles song I Am the Walrus.

-The sound guy who gets yelled at is based off my bud Devin who had a very similar experience happen to him.

I think that’s all of them. 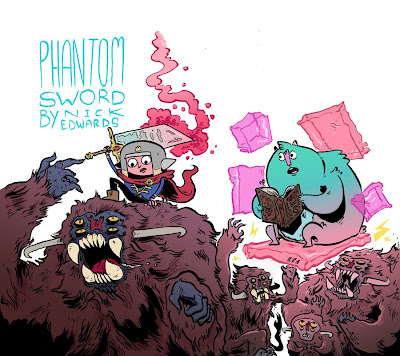 Also do me a favor and go and vote for Phantom Sword over at Zuda.com. I still check it out every month, and am almost always disappointed because the story I want to win almost never does. This month this one at least has a chance, so do it. Thanks in advance. 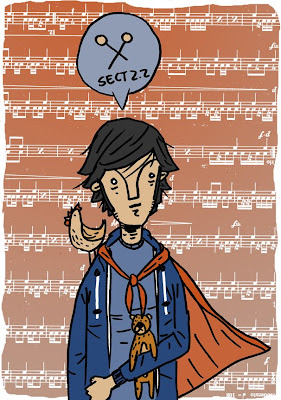 Well the much delayed section 2.2 is up now. Check it out HERE! Sorry about the delays. If you go to the website and read the news section I explain why the section was so heavily delayed. But on to more interesting things. The section is up and I think it's one of the best yet. This section is chalk full of little references, some of them are inside joke types of things and some of them are pretty easy to figure out. I think in the next post I'll tell as many as I can remember. See how many you can find.
Posted by Neworld at 8:03 PM No comments: 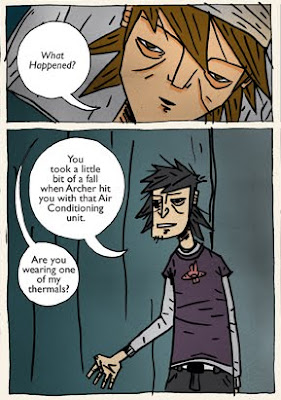 I tried a couple different text bubble options when working on chapter 2. This was a shot at hand drawn text bubbles. It didn't quite work out.
Posted by Neworld at 8:37 PM No comments: 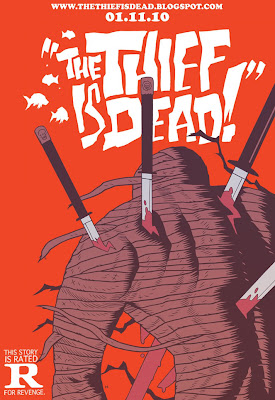 One of my favorite artists Dan Hipp is launching a second blog to promote/release the 3rd volume of his graphic novel Gyakushu, and he's got a thing going where he wants people to post Gyakusu artwork on blogs and websites to help get the word out. So I felt obliged to help. I have been a huge fan of Dan Hipp and Gyakushu for a long time. In fact looking back I just mentioned a quote i read from him a couple of posts ago. When the site goes live it should go up HERE!

I also decided to do a drawing of a couple of characters from Gyakusu, and post the sketch Hipp did for me at comic-con a couple years back. It's probably the best sketch I've gotten from an artist, and Rob Guillory was really into it when he saw it. 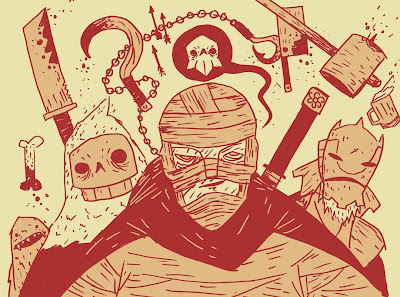 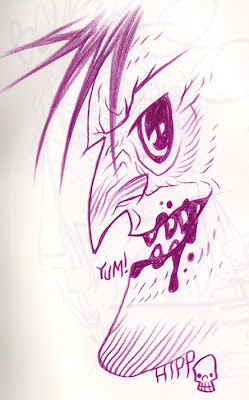 Posted by Neworld at 4:54 PM No comments:

Here are all the layouts I did for the section 2.1. Now for some news. Well, this seems to be the second section curse because today I decided to install Windows 7 and now I have to reinstall all my programs, and at the moment I don't even have any adobe products so I'm a little sceptical I'm going to make the second due I set. I'll keep you updated.