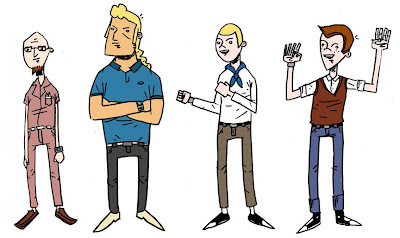 I've been re-watching one of my favorite shows. The Venture Brothers. I thought I'd give drawing them a shot. So here it is. I thought it turned out pretty decent. Maybe I'll do some more of Secondary characters later.
Posted by Neworld at 3:45 PM No comments: 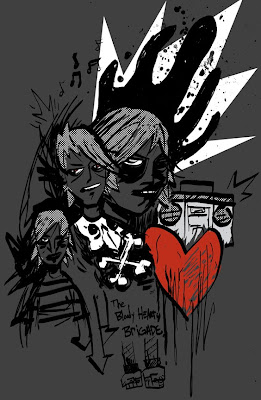 I haven't drawn anything just to draw for a while, so here is a sketch. Not great, but OK. Hopefully more tomorrow.
Posted by Neworld at 12:52 AM No comments: 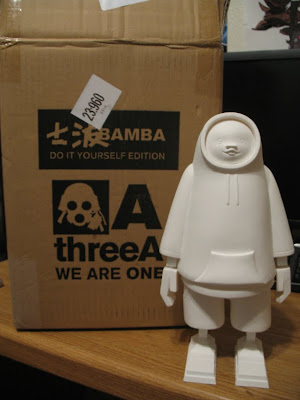 Check out what I got in the mail today. I've been a really big fan of Ashley Wood for a long time, and I really dig his toys, but they are way too expensive for my budget. But when Bambalad came around I had to get it. It's super awesome. Right now he's hanging out around my turntables. 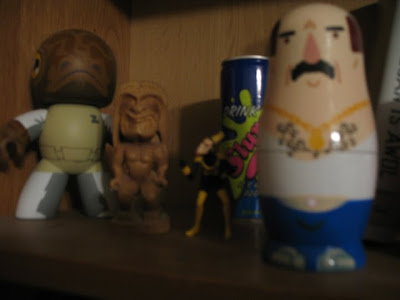 I've gotten a bunch of other similar nerd trinkets lately, these are some of the other ones I've acquired.

In other news. The next installment of my work with Multiversity Comics is up. It's a look at my process for a page of Northpark Underground. It took me a while to do everything for it, so go check that out over HERE.
Posted by Neworld at 1:00 AM No comments: 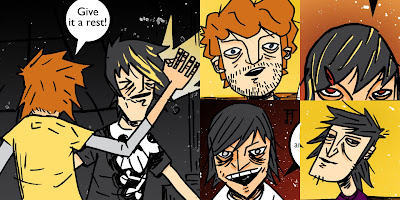 I thought I'd focus on facial expressions this time around on the close-ups feature. I thought there was a lot of really good ones in the last section. I really love that last one of Greg, it's way more expressive than he normally is. I also felt I needed to include the Super Powered Pimp Slap, because I just thought that was awesome. If you look closely on the close-up you can see that Tad knocked his lip ring out.

Now for updates, and some general goings on around the NWU. I've been getting a lot of news about Hungry lately. Hopefully that will be showing soon on the interwebs. You might also be seeing some NWU stuff up on another website in near future, I 'll give you updates on that, as I get them.
As far as Northpark goes. Here are some updates. Chapter one is finally coming to close. The wait for the next two sections is going to be 3 weeks for both them, and then I'm going to take a break for a while, while I work on Chapter 2. I won't even post a date for Chapter 2 until 2.1 is done, so it might be a while. I wrote all of Section 1.9 yesterday. Boy was it a doozy. I've never spent so long writing three pages. I think the next section is going to be a lot of fun. A lot of backstory. I've got a lot of character designs to do for the next section, so hopefully you see me doing a lot of post in the next couple weeks. That's it for now.
Posted by Neworld at 9:20 AM No comments: 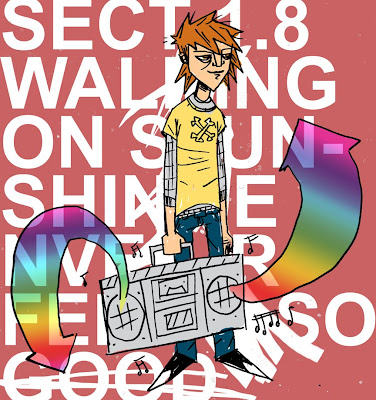 New section is up. It's a good one. I replaced this post, which was incorrect in the first place. Here is a LINK. I'll talk more about the section next post.
Posted by Neworld at 12:49 AM No comments: 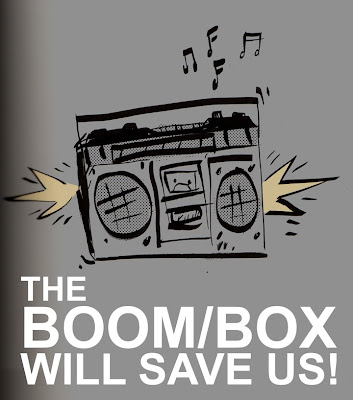 Post 400. Nothing special this time.
Posted by Neworld at 2:12 AM No comments: 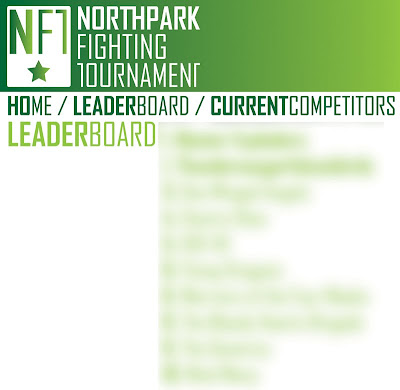 A page from the Northpark Fighting Tournament website. This page was done specifically for the upcoming section, but I might get around to actually making the website in the future.

In other news, I got some interesting information about the short story I did a little while back. It looks like stuff is happening with that, and it might be up for viewing some time in the not so distant future.
Posted by Neworld at 11:39 PM No comments:

A couple online friends started a really cool online comic news site called Multiversity Comics. I'm going to be doing some work for them over the next couple weeks, but here is the first thing I'm doing for them. Some Banner Headers. These are two different versions.

If you want to check them out, they're in the blog roll.

I know I said I'd post a look at the NFT website today, but it will be up tomorrow.
Posted by Neworld at 12:26 AM No comments:

The Northpark Fighting League's Logo. Check back tomorrow for a look at their website.
Posted by Neworld at 12:01 AM No comments: 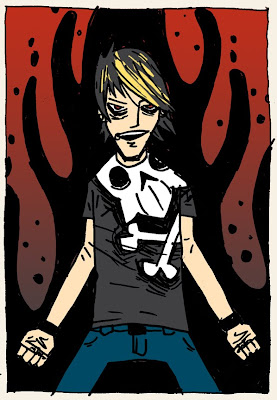 A look at a panel from the new section.
Posted by Neworld at 2:59 PM No comments: 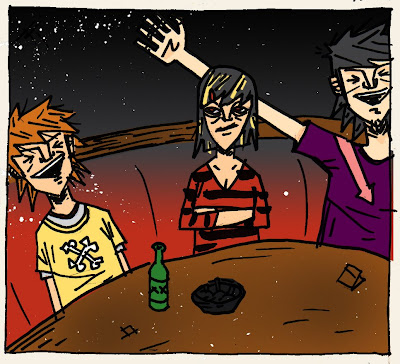 Even though the last page of Sect 1.7 was a tad rushed, this was my favorite panel of the bunch. I usually try to end a section on a Joke or a Cliff hanger, but I think this was the first one that really had neither. Just a nice a little shot of the group sitting at a bar table. I really liked that they are laughing, but it's silent and you don't know anything about what they're laughing about. I considered putting the tail end of a joke here, but thought it worked a lot better this way. Another thing I really like about this panel, is how even though Tess complains about hanging out with the guys, you can see a faint smile on her face here. Just kind of hinting that she doesn't hate them as much as she'd like you to believe.

Not to ruin or spoil anything, but this panel, and basically the whole last page of 1.7 was a set-up for a lot of story to come. Especially in Chapter 2 and 3. This panel is from Greg's view and he's starting to see Tess differently, and that's going to come into play a lot in Chapter 2.

As far as Northpark news goes. I'm having a bit a trouble writing sect 1.8, I'm usually way ahead of the game, and have the next section already written by the time I've finished drawing the previous section, but that wasn't the case this time. Hopefully I can work out all the Kinks by this weekend so I can start drawing.

And I know I still haven't fixed that one page yet. Hopefully this weekend.
Posted by Neworld at 12:42 AM No comments: 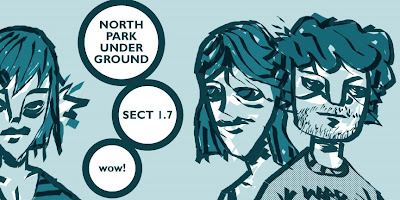 Well. This section. Geez. Got a little tight there at the end. In fact. I got it up about 10 minutes late. Sorry if you were sitting at your computer waiting. The lateness is also the result of this super late (and totally wacom'd) blog post. The last page is really rushed, so don't judge me to harsh.

I'm going to do a little something special for the close-ups tomorrow. It's going to be a kind of director's commentary for one panel. Look for that tommorrow. Now I need to go fold some laundry, and then get to sleep, and then wake up tomorrow, and start writing section 1.8 (I got a little behind on writing).

There is a grammar error, I know. I'll fix it tomorrow.
Posted by Neworld at 12:33 AM No comments: