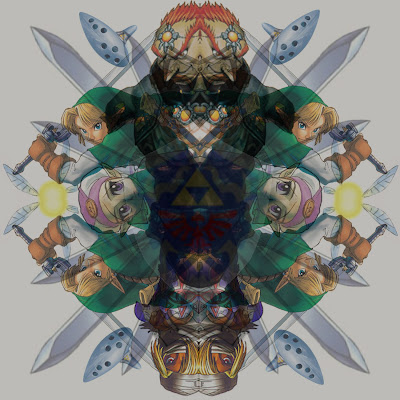 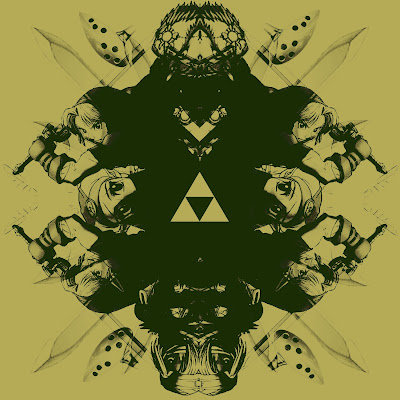 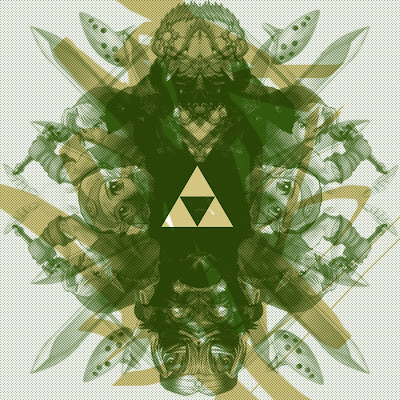 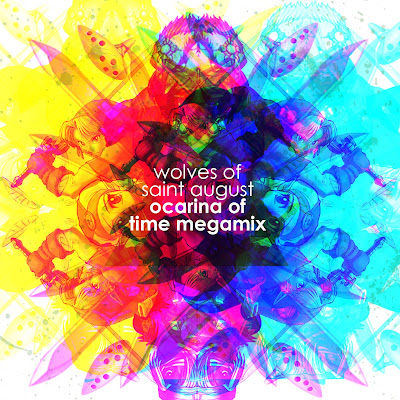 A bunch of new designs for the Ocarina Of Time remix project.

Posted by Neworld at 1:14 AM No comments: 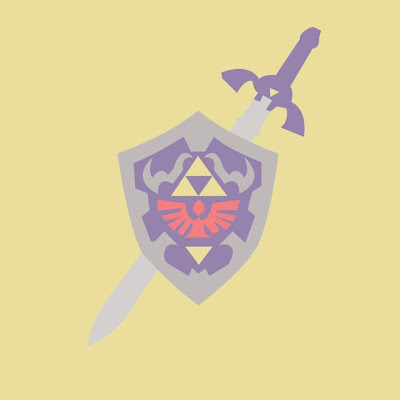 I'm working on a project where I'm remixing the soundtrack to Ocarina Of Time. This was me futzing around with cover ideas. I think I'm actually going to go a completely different way now, but here is an idea.
Posted by Neworld at 12:39 AM No comments: 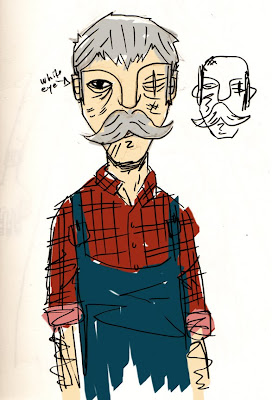 Final fantasy really takes away from your blog posting time. I'll tell you. Well back to the blog. Here is the initial sketches from Horace from last section. The sketch looks like a little like Jeff Lemiere's style to me.
Posted by Neworld at 11:13 PM No comments: 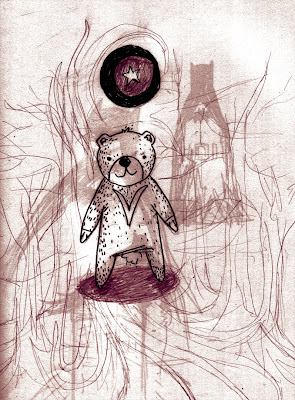 Another sketch from the trip. This is of my favorite child-hood stuffed animal. I did a bunch of pencil drawings all around it, but didn't really come up in the scan, so i futzed with the contrast and color balance to bring it out. You can also see some of my terrible batman sketches in the background.

Here is a little bonus. There is a podcast that is recorded at my comic shop most weeks, and last week at my shop I got pulled on to talk about what I was reading. It's called Fanboy Planet and I'm in episode 178.
Posted by Neworld at 12:44 AM No comments: 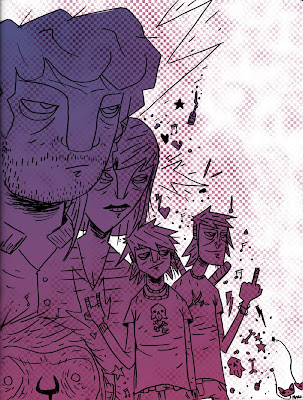 Another drawing I did on my trip.
Posted by Neworld at 10:22 PM No comments: 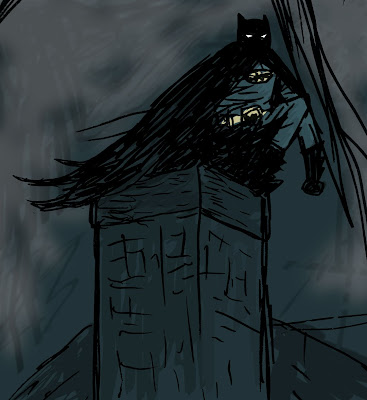 One of many Batman sketches from the recent trip. This was the only one that was any good.
Posted by Neworld at 12:12 AM No comments:

Close ups for section 2.5. More stuff tomorrow.
Posted by Neworld at 12:34 AM No comments: 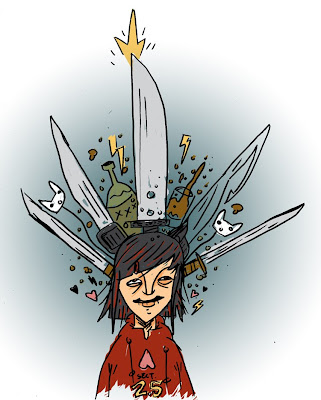 The post is up a little late (I accidentally already posted something for Monday), but the section was actually up on time. Read the new one HERE. Chapter 2 is already half over. It's kind of been flying by. Now I got to sit down and write the next section.

I did a ton of drawings while I was on my trip, so expect to see a lot of posts this week.
Posted by Neworld at 12:05 AM No comments: 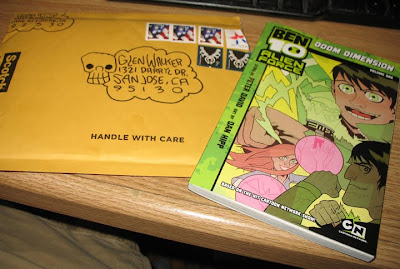 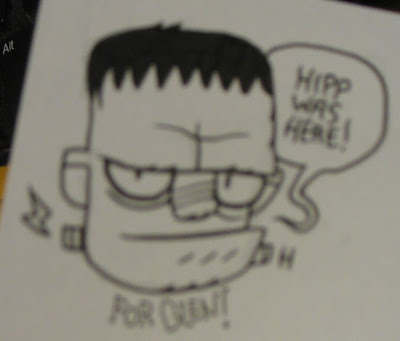 I won a contest for a signed copy of one of my favorite artists Dan Hipp's new book. There's a picture of it the packaging and a very blurry picture of the drawing he did on the inside.
Posted by Neworld at 10:59 PM No comments:

So I had a weird idea to cast Northpark Underground. This may be the nerdiest thing I've done on my blog. Oh well. Here's what I came up with. 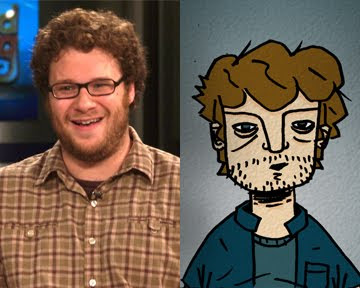 Seth Rogen as Greg. This one is a little obvious, and it wouldn't be his normal character, but I actually think he would be great as Greg. 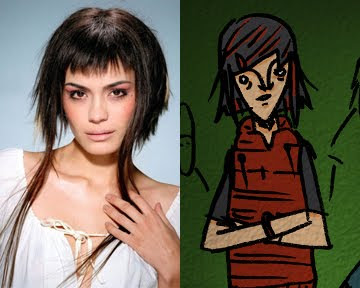 Shannyn Sossamon as Tess. I haven't seen that many of her movies, but her character in wristcutters is pretty much what Tess acts like. Also I'm pretty sure I was watching A Knights Tale while redesigning her hairstyle. DaveFranco as Tad. This guy is by far the best pick out of the whole thing. He was like born to play Tad. I'm almost positive I stole that smile for Tad. 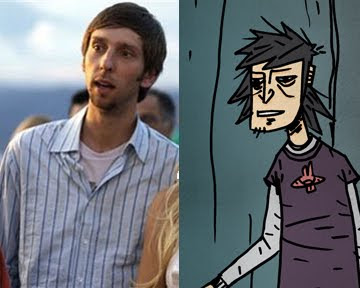 Joel Moore as Zak. Probably the weakest cast, and I feel like Zak would be a little better looking than this guy. But I always felt like Zak should be tall and kind of gawky, and this guy is.

I hope that was fun for everyone.
Posted by Neworld at 7:17 PM No comments: 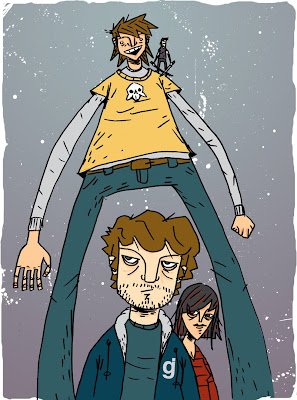 The blog has been a little light lately. Doesn't mean I haven't been working though. I'm already almost done with the next section of Northpark. The blog will most likely continue to be a little light for a while unfortunately, as I'm going to be extremely busy this week. I've got a hockey game, final fantasy is coming out, and I'm going on vacation for a couple days at the end of the week. But hopefully I'll have of the new section done by the time I leave.

I hadn't done any good drawings for the blog in a while, so I decided do this. I was very inspired by the promo material for the new Gorillaz album Plastic Beach (which is phenomenal by the way). I think I'll do another post of Gorillaz some time in the future. Thinking about doing a duel post where I talk about their art in this blog, and their music in the wolves blog.
Posted by Neworld at 11:09 PM No comments: 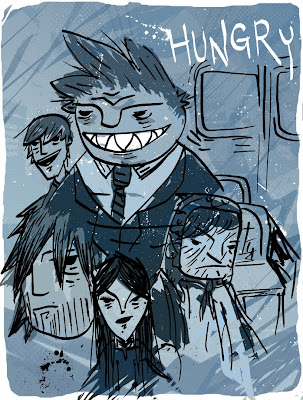 The story of Hungry is a long one. Last year around May or June I was contacted about working on an anthology project called Bizarre Mysteries. They had seen Maladroits on Zuda and thought I might be able to do something interesting for them. After talking to them, they decided they wanted to pursue a Zuda release. So they sent me the script and I said I'd do it. I actually ended up doing the project really quickly. I did the whole thing in just a couple weeks, and sent it off to them.

It was right around comic-con time when stuff was finishing up with the project and they took it to Zuda and showed it to them at the con. Zuda seemed interested, but wanted to them to submit it through the normal process with the anthology project in mind. They contacted me and told me that they actually wanted to lead with my story, so they would be submitting hungry as the actual pitch. So we sent it off. And then we waited for a long time.

Eventually they got back to me and said that even though they liked the idea of the project, the logistics of getting all the artist and writers paid would be a nightmare, and that they were going to have to pass. This sucked, but Sam Little who wrote the story suggested that we just expand the story an extra page (the original story was only 7 pages because the original concept was to have an introductory page with a sort of crypt creeper type character introduce each story). I did the extra page which you can now see as the first page. We sent it off, and after waiting another fairly long amount of time they declined again. My guess is that they knew this that we were just recycling story and we would be forcing it to be a ongoing.

It was a very long process, and it sucks that nothing ever came of it, but you win some you loose some. But now you can finally read it. Check out a Hungry HERE.
Posted by Neworld at 1:26 AM No comments: